On the blog today, we have a "not so missing" 1976 card for former speedster Miguel Dilone, who played a handful of games in 1975 for the Pittsburgh Pirates, his second taste of the Big League after his debut in 1974: 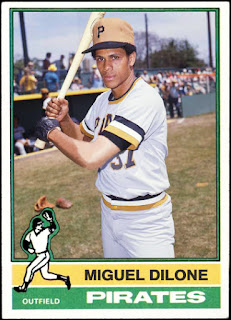 Dilone went 0-6 at the plate for the Pirates in 1975, but did score eight runs as a pinch-runner, while also stealing two bases in that limited role.
In 1974 as a nineteen-year-old he went 0-2 at the plate over 12 games, scoring three runs while stealing two bases while also drawing a walk.
It wasn't until 1978 when he found himself playing with the Oakland A's that he'd see any amount of playing time, appearing in 135 games though only collecting 292 plate appearances, stealing 50 bases and scoring 34 runs while only collecting 59 hits.
After a 1979 season that saw him suit up for the A's and Chicago Cubs, for a combined 73 games, he had his best Major League season in 1980 when he hit an impressive .341 with 61 stolen bases, collecting 180 hits over 528 at-bats for the Cleveland Indians, even getting some MVP attention at the end of the year.
In 1981 he did hit .290 for the Indians during the strike year, appearing in 72 games for the Tribe,
but between 1982 and 1985 he would play parts of each season for no less than five teams: Indians, White Sox, Pirates, Expos and Padres, never getting a full-time gig again.