Great card to add to the blog today, a "not so missing" 1975 card for four-game Major Leaguer Rich Puig of the New York Mets, who played the entirety of his Big League career in September of 1974: 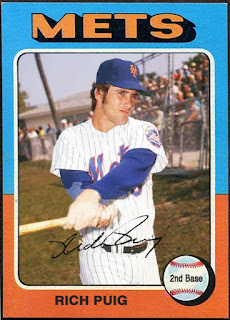 Puig ended up going 0-10 at the plate in what turned out to be the only taste of Major League ball, striking out twice and walking once.

Sadly for him the next season he'd find himself in the Chicago White Sox minor league system, where he would also play in 1976 before calling it a career, never getting back to the Big League level again.
Love creating cards for guys like this! Who knew there was another "Puig" in the Majors before Yasiel!?