We have another great addition to the WTHBALLS family today, a 1971 "not so missing" card for six-game Major League pitcher Migel Puente of the San Francisco Giants: 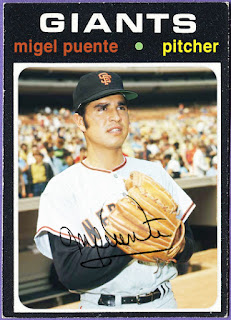 Of those six appearances he started four of them, even completing one game while finishing one other as a reliever.
For some reason he left American ball after that year and went on to play in the Mexican League through the 1975 season, though I suspect he played longer.

Regardless, the entirety of his American professional experience was played for the Giants, beginning in 1968 before his eventual call-up in 1970 for those scant six games in May of 1970.