On the blog today, a great card to add to the "WTHBALLS" checklist, a "not so missing" 1975 card for two-game Major League pitcher Roger Miller of the Milwaukee Brewers: 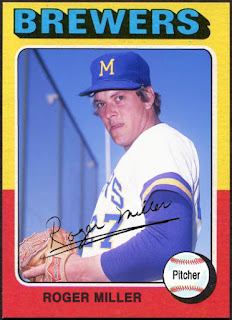 Miller's entire Big League career was over a week in September of 1974, appearing in two games while not factoring in a decision, sporting an earned run average of 11.57 over 2.1 innings.
He would toil for another two seasons in the Milwaukee Brewers' Minor League system but never get another chance at a Big League appearance again.
In 1977, still only 22 years of age, he'd call it a career after a round season in the Minors where he ended up with a 5.75 ERA over 38 appearances and 108 innings pitched.
Posted by John23 at 5:49:00 AM