Haven’t done one of these in a while, so here’s a 1972 “Then & Now” for former Cy Young winning pitcher Mike McCormick, who finished up a nice 16-year career in 1971 with the Kansas City Royals, though he appeared on a Topps card as a San Francisco Giant: 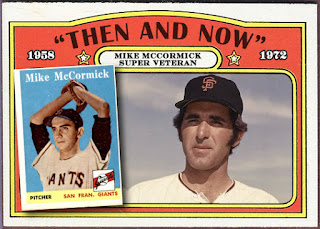