Up next in the “Missing Rookie Cup” thread is a revised 1973 card for “Groove” Don Baylor, who was just starting an excellent Major League career that would last 19 seasons: 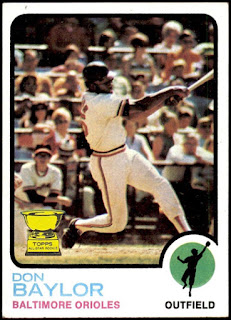 Baylor had himself a nice rookie campaign, hitting 11 home runs while also stealing 24 bases in only 102 games and 320 at-bats for the Baltimore Orioles, and getting named to the Topps all-rookie team for his efforts.
It was just a small glimpse of what was to come as he would go on to hit 338 home runs during his career, with 285 stolen bases thrown in to make him a legitimate double-threat.
During the course of his career, he’d hit as many as 36 home runs, during his AL MVP 1979 season while with the California Angels, while stealing as many as 52 bases, in his lone season with the Oakland A’s in 1976 after being traded for Reggie Jackson.
He would also finish his career in a great way, reaching the World Series the last three seasons, each as a member of a different team: Boston Red Sox in 1986, Minnesota Twins in 1987 and Oakland A’s in 1988.
I loved his time with the New York Yankees from 1983 to 1985, teamed up with Dave Winfield and Don Mattingly to give them quite the offensive trio.
I still can’t believe he passed away last Summer. Great man and great player. RIP “Groove”.
Posted by John23 at 6:00:00 AM