Today I post up a 1970 “not so missing” card for former New York Yankees pitcher John Cumberland, who appeared in a scant two games during the 1969 season: 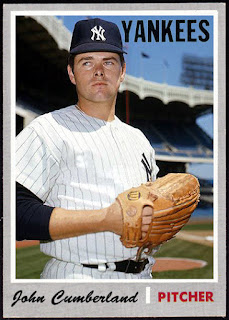 Cumberland pitched four innings for the Yankees over those two appearances, allowing two earned runs on three hits and four walks, not factoring in a decision.
The previous season he had his first taste of the Big Leagues, pitching in one game at the end of the year, throwing two innings and allowing two earned runs.
In 1970 he would be traded to the San Francisco Giants for veteran pitcher Mike McCormick, where he would have his best season as a Major Leaguer in 1971, going 9-5 with a nice .292 ERA over 45 appearances and 185 innings of work, including two shutouts.
However he would find himself struggling in 1972, going 1-5 with a bloated 7.71 ERA in 23 games, finding himself with the St. Louis Cardinals by season’s end, then spending all of 1973 in the Minor Leagues before making it back in 1974 with the California Angels where he appeared in the final 17 games of his 6-year career, going 0-1 with a 3.74 ERA over 21.2 innings pitched.
All told, he finished his playing career with a record of 15-16, with a 3.82 earned run average over 110 appearances and 334.1 innings pitched, with two shutouts and two saves.
Posted by John23 at 5:51:00 AM