Here was a fun card to create, a 1970 “Not So Missing” Ted Simmons card for a guy that should have gotten more Hall of Fame support for his stellar 21-year career: 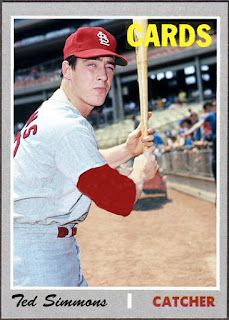 Simmons was still a teenager when this card would have come out, appearing in five games for St. Louis and collecting three hits over 14 at-bats.
Of course, the man would go on to be one of the greatest hitting catchers of all-time, but sadly stuck in the shadows of guys like Johnny Bench and Gary Carter, never getting the attention he should have gotten in my opinion.
The eight-time All-Star went on to collect 2472 hits, with 483 doubles, 248 home runs and 1389 runs batted in, hitting an excellent .285 over his 2456 games.
He would drive in over 100 runs in a season three times, while also adding another five seasons of 90+, with six seasons of 20 or more homers.
Just look at this guy’s career. How on earth did he only get 3.7% support in his ONLY year on the Hall of Fame ballot?
I just do not get it.
One last stat I will leave you with: in 8680 career at-bats, Simmons struck out only 694 times. That is only 8 strikeouts per 100 at-bats over his entire career.
This man is a Hall of Fame catcher in my book.
Posted by John23 at 5:52:00 AM