I love creating cards like this, a 1979 Jim Gaudet, who played for the Kansas City Royals for a total of six Big League games, three in 1978 and three in 1979: 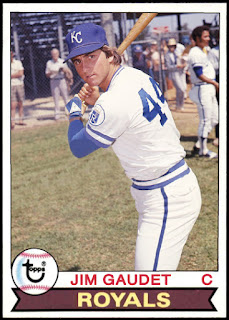 Gaudet came up as a September call-up in 1978 for his first taste of the Majors, going hitless in eight at-bats while getting in some catching duties.
The following season he’d be back up for a brief spell, collecting his one and only hit, which was over six official at-bats, again playing three games behind the plate towards the end of the season.
But that would it for him in the Big Leagues, as he’d spend the rest of his professional ball-playing days in the Minor Leagues, playing for the Royals and Detroit Tigers organizations before retiring for good as an active player in 1982.
It’s always fun creating cards for guys that really only had a cup-of-coffee in the Majors, yet never got a card along the way. Best part of running this blog!
Posted by John23 at 5:48:00 AM