Long overdue, it’s time to go and give Bert Campaneris, “Campy” a “Nicknames of the 1970’s” card, in his case a 1976 edition since I’ve always loved the color scheme of the Oakland A’s cards that year: 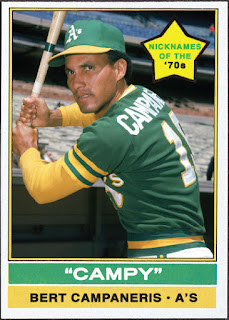 “Campy” was a consistent spark plug for the Athletics organization since he came up in 1964 and making quite a splash by hitting two home runs in his Big League debut off Minnesota Twins pitcher Jim Kaat.
He’d go on to lead the American League in stolen bases six times, while getting named to six All-Star teams along the way.
Of course, he would also be an important member of the three-time World Champion Oakland A’s of the mid-70s along with Reggie Jackson, Joe Rudi and Catfish Hunter just to name a few.
He would end up playing 19 Major League seasons, all the way to 1983, finishing up with 2249 hits, 1181 runs scored and 649 stolen bases over 2328 games.
Posted by John23 at 5:43:00 AM

Email ThisBlogThis!Share to TwitterShare to FacebookShare to Pinterest
Labels: 1976, A's, Bert Campaneris, Nicknames of the 70's