Next up in my ongoing series of “correcting” Topps cards that for some reason lacked the “Topps All-Rookie” cup is the 1973 Garry Maddox card: 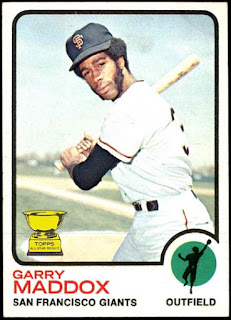 Maddox, eventually to be known as the “Secretary of Defense” for his defensive prowess, came up with the San Fracisco Giants in 1972 and had a nice rookie campaign when he hit .266 with 122 hits, 12 homers and 58 runs batted in.
Those numbers got him selected for the Topps Rookie All-Star team, but as stated earlier, didn’t get him the “Rookie Cup” some of the other players selected got in the 1973 set.
Regardless, the man went on to have an excellent Major League career over the next 15-years, primarily with the Philadelphia Phillies, where he was traded in 1975 for Willie Montanez.
He’d go on to win eight Gold Gloves, all with the Phillies, while hitting .285 for his career, throwing in about 25 stolen bases a year.
In 1976 he’d even hit as high as .330, earning him a fifth place finish in the National League’s MVP race, batting in a line-up with other stars like Mike Schmidt and Greg Luzinski.
He’d retire just a couple of weeks into the 1986 season, finishing up with that .285 batting average, 1802 hits, 248 stolen bases, and a reputation as being one of the greatest defensive outfielders to play the game.
Posted by John23 at 5:59:00 AM