Well, here we are, the last installment of my “Awards” special sub-set through the 1970’s, and it is a 1979 card celebrating the 1978 Rookies of the Year: Bob Horner in the National League and Lou Whitaker in the American League: 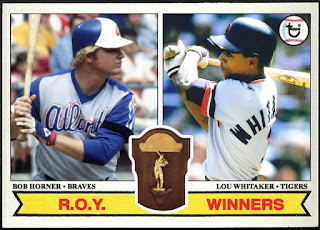 Bob Horner made a huge splash in the Majors in 1978, going straight from being the #1 overall pick in the amateur draft that June to a Major League field for the Atlanta Braves, and he didn’t disappoint, slamming 23 homers while driving in 63 runs in only 89 games.
Though he only played slightly more than half a season, he beat out second-place finisher Ozzie Smith of the Padres for the National Leagues’ top rookie honor.
Over in the American League, Detroit’s Lou Whitaker took home the rookie honors, almost winning the award unanimously over the rest of the field as he went on to hit .285 with71 runs scored and 58 runs batted in while manning second base.
Both would go on to have nice Major League career, though Whitaker would go on to play 19 years for the Tigers and become a fan favorite alongside his teammate Alan Trammell, a double-play combination that would set the record for longest running 2B/SS combo in MLB history.
Nevertheless, two impressive debut seasons for Horner and Whitaker, and thus closing out this fun thread after 30 entries, covering Cy Youngs, MVP’s and Rookies of the year!
Posted by John23 at 5:11:00 AM