Next up in the “Nickname of the 70’s” parade is one of my favorite players from the era, “Mr Clean” Steve Garvey, who earned the alias early in his career because of his seemingly “squeaky-clean” image: 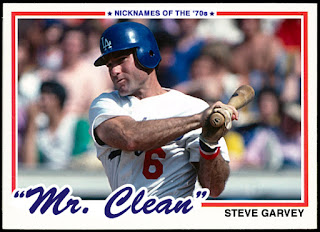 Though he’d go on to tarnish that image later in life, pretty much derailing his political ambitions post-baseball, he was indeed the poster child for the All-American boy from the moment he came up to the Majors through the early-80’s.
Hey, I don’t judge, so we’ll leave that aside and get to the fact that he was the premier first baseman in the National league from the mid-70’s through the mid-80’s, an All-Star year in and year out.
Modern metrics be damned, the man topped 200-hits six times, took home the NL MVP in 1974, won four Gold Gloves and strung together a run of 1207 consecutive games played, which is still the NL record.
The anchor of the powerhouse Los Angeles Dodgers teams of the era, they took over from Cincinnati as the preeminent team in the Senior Circuit in the late-70s, reaching the World Series three times over five seasons between 1977 and 1981, winning it all that final year, beating the New York Yankees and exacting some sweet revenge for their two losses in 77/78.
I’ve said it once, I’ve said it a few hundred times: the fact that this man is NOT in the Hall of Fame, representing his era of Major League baseball, is a joke. Flat out nonsense. Beyond the numbers, the personality, the leader of a team that was shattering attendance records, helping popularize the game further, the man was a an All-Star year in-year out.
In my book, seeing that the most support he ever received was 42.6%, which was in his second-year of eligibility in 1994, is nothing short of a mark on what the Hall of Fame is.
Posted by John23 at 6:13:00 AM

Email ThisBlogThis!Share to TwitterShare to FacebookShare to Pinterest
Labels: 1978, Dodgers, Nicknames of the 70's, Steve Garvey