Up on the blog today I have a card that I’ve contemplated for a while now, a “fantasy” 1972 “Traded” Willie Mays card for the all-time legend: 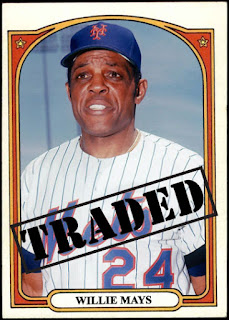 I’m not the biggest fan of Topps 1972 Traded sub-set. To be honest I never liked them.
However I always wondered if Topps could have squeezed out a Mays version since he was traded to the New York Mets in May of the 1972 season.
I don’t know the print-schedule for the series regarding the 1972 set, but it must be pretty close, no?
Nevertheless, as we all know Mays was traded back to where it all began for him, New York, for pitcher Charlie Williams and $50,000 cash.
He’d end up playing through the 1973 season, even appearing in the World Series as his final action as a Major League player in a losing cause against the juggernaut Oakland A’s three-peat champions.
By the time he hung them up, he finished with over 2000 runs scored, 3000 hits, 660 home runs and 1900 runs batted in, while being named to 20 All-Star teams and winning 12 Gold Gloves.
Easily the greatest player of the last 50-years, if not ever.
“Say Hey” Willie Mays.