Been a little while since I created a “Coach Card”, so today I post up a 1973 Lew Burdette, as he was helping out old teammate and Atlanta Braves manager Eddie Mathews: 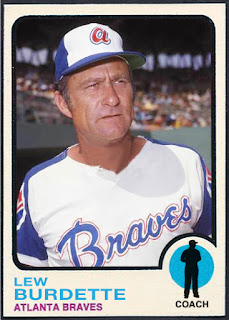 Burdette of course will always be known as the hero of the 1957 World Series when he pitched the (then) Milwaukee Braves to a surprising championship win over the favored New York Yankees, winning three games, all complete games, two of them shutouts.
He put in 18 seasons in the Big Leagues, winning 203 games while posting and earned run average of 3.66 along with 33 shutouts and 32 saves over 626 appearances.
Between 1956 and 1961 he averaged just under 20 wins a season for the Braves, with a high of 21 in 1959 which led the National League, as well as his four shutouts and 39 starts.
Great playing career for a baseball lifer, who’d retire after a couple of seasons with the California Angels in 1967 as an arm out of the bullpen at the age of 40.
Posted by John23 at 6:13:00 AM