Time to honor All-Star outfielder and a major factor in the way the game is structured to this very day, Curt Flood, with a “Then and Now” card in the 1971 set: 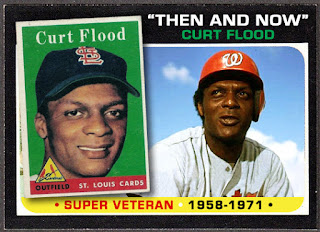 Flood pretty much sacrificed his career by the early-70’s , fighting MLB for their handling of players “as cattle” in regards to trades, releases, eventually opening the doors for Free Agency and allowing players some control over their own careers.
You have to understand how HUGE this was, as it was something players have been trying to do since the late-1800’s (think of the failed Players League of 1890).
Sadly for Flood, while it did end up helping ballplayers soon after he left the game, his own playing career was over by the age of 33, really 31.
Beginning in 1962 Flood strung together eight fantastic seasons starring for the St. Louis Cardinals, consistently batting over .300, two 200-hit seasons, and seven straight Gold Glove Awards, right up to the 1969 campaign.
Then it all began with a trade to the Philadelphia Phillies along with others including Tim McCarver for superstar slugger Dick (Richie) Allen and a couple of other players.
Flood refused to report to his new team, eventually forcing the Cardinals to send prospect Willie Montanez to complete the deal, essentially ending his career as a player while he fought to have control over his own career, fighting the “reserve clause”.
After sitting out the season in 1970, the Phillies eventually sent him to the Washington Senators, where Flood played the last 13 games of his career before leaving the team within the first month, abruptly closing out a great career that could have been Hall of Fame worthy had he played longer.
If you’re not familiar with Flood’s case, and his teaming up with Players’ Union head Marvin Miller, you MUST read up on this to understand the state of the game today.
I just touched upon some brief points here, but the case and Flood’s decision to pursue this cause is incredible.
Every single player today has much to thank Flood and his sacrifice, allowing the Free Agent boom of the mid-70’s to change the game forever, leading to the salaries and benefits even the average players have today.