Up on the blog today we have a “not so missing” 1976 card for former pitcher Steve Blateric, who finished up his brief Major League career with the California Angels in 1975: 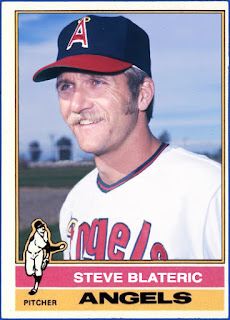 Blateric appeared in only two games for California in his final Big League season, posting an ERA of 6.23 over 4.1 innings pitched, not factoring in a decision.
That action in ‘75 was his first since the 1972 season, when he appeared in one game for the New York Yankees, pitching four innings of scoreless ball, once again not factoring in a decision.
The previous year he made his Major League debut, with the Cincinnati Reds, appearing in two games and giving up four earned runs over 2.2 innings for a bloated ERA of 13.50, and yet again, not factoring in a decision.
So his final numbers over his three-year career were a 5.73 ERA in five appearances and 11 innings pitched, without getting tagged for either a win or a loss, striking out 13 while walking only one.
Posted by John23 at 6:20:00 AM