A 1973 SPECIAL: "PASSING THE TORCH" WITH WILLIE MAYS AND CESAR CEDENO

I came across this really nice photo and decided to create a 1973 “Special” card of the great Willie Mays and emerging superstar Cesar Cedeno, who was following in the “Say Hey Kid’s” footsteps as a power-hitting speedster: 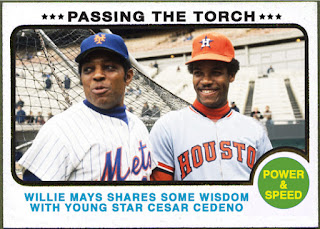 Of course, time would reveal that NO ONE is another Willie Mays, but Cedeno put together a wonderful 17-year career that saw him top 2000 hits, 500 stolen bases one one home run short of 200.
Along the way he also took home five Gold Gloves while making the All-Star team four times, topping 50 steals six straight seasons between 1972 and 1977.
As for Mays, what needs to be said? One of, if not THE greatest player to grace a baseball field. The man did it all, 20 All-Star teams, 12 Gold Gloves, two National League MVP’s while hitting 660 homers, stealing 338 bases and collecting over 3000 hits while driving in over 1900.
Even writing what I just wrote about the man seemed silly. It’s Willie Mays for God’s sake. L-E-G-E-N-D.
I would have loved to listen in on the conversation these two were having when the photo was taken!
Posted by John23 at 6:12:00 AM