Time to go and give Mike Schmidt a card in my on-going “1975 In-Action” thread, as he was just beginning to show the baseball world what a Hall of Fame third baseman he was when this card would have come out: 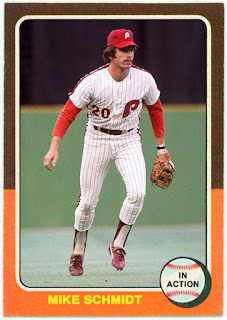 Schmidt was coming off his first successful Major League season in 1974, winning the first of his eight National League home run titles with 36 blasts, while driving in over 100, which would be the first of nine times in his 18-years in the Big Leagues.
What a career: 12 All-Star nods, 10 Gold Gloves, three Most Valuable Player Awards, all while anchoring a Philadelphia Phillies team that would reach their apex in 1980, taking home the World Series with a victory over the Kansas City Royals.
By the time he hung them up in 1989, he’d hit 548 home runs, drive in 1595 runs while scoring 1506, while also stealing 174 bases! Easy to forget he could steal a base or two. As a matter of fact, it’s real easy to forget that he came one stolen base short of joining the (then) exclusive 30-30 club back in 1975, slamming 38 homers to lead the league while swiping 29.
Nevertheless, “Schmitty” rode that success straight to a Hall of Fame induction come 1995, a lock if there ever was one.
Posted by John23 at 5:55:00 AM