Today we have a “not so missing” 1978 card for former pitcher Mike Davey, who made his Major League debut during the 1977 season with the Atlanta Braves: 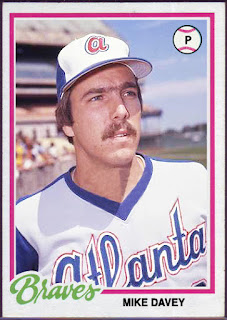 Davey appeared in 16 games, throwing 16 innings and going without a decision while sporting and ERA of 5.06 with two saves, all out of the bullpen.
The following season he’d appear in three games, again all in relief, tossing 2.2 innings without an earned run, not factoring in a decision.
Sadly for him he’d never make it back to a Big League mound, playing out the next two years in the Minor Leagues with Seattle and Pittsburgh before retiring as an active player after the 1980 season.
All told, Davey finished up with a 4.34 ERA over 19 appearances and 18.2 innings pitched, collecting two saves and striking out seven without a decision.
Posted by John23 at 5:41:00 AM