Here’s a “Not So Missing” 1978 card for former Kansas City Royals pitcher George Throop, who actually was on one of those multi-player rookie cards in the 1976 set a couple years before: 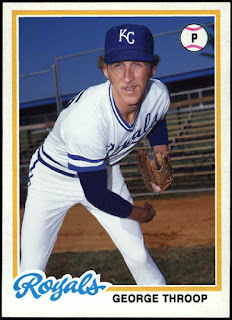 Throop appeared in four games for the American League West champ Royals, not factoring in a decision with an earned run average of 3.38 over 5.1 innings of work.
He’d go on to post a record of 1-0 for Kansas City during the 1978 season, appearing in one single game and pitching three innings of scoreless ball, though walking three batters and giving up two hits.
The following year, he get traded to the Houston Astros just as the season began for a player to be named later, where he’d go 1-0 in 14 appearances, all out of the bullpen, thus closing out what would be a four-year MLB career that had him finish 2-0 with a 3.83 ERA over 30 appearances and 42.1 innings pitched.
Posted by John23 at 6:13:00 AM