Up on the blog today, and acknowledging that it is indeed an older photo of the player, here’s a “not so missing” 1978 card for former Boston Red Sox outfielder Sam Bowen: 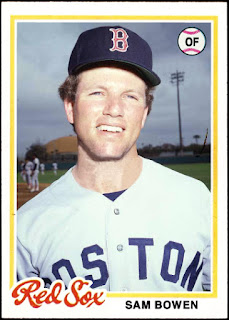 Try as I might, I could not find a good shot of him in the Boston red caps worn during the 1977 season, but I did come across this image of him, so it’ll do for now.
UPDATE: THANKS TO MY FRIEND BILL, WE HAVE THIS VERSION: 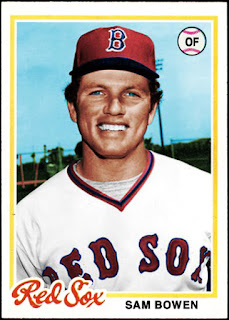 Thank you Bill!!!
As for Bowen, he appeared in three games for the Red Sox in 1977, the first of his brief three year career, all with the Boston organization.
In his only two at-bats he went hitless, striking out both times, having to wait until the following season to collect his first knock, which was actually a home run for his only hit over a six game tenure.
After playing the 1979 season entirely in the Minor Leagues, he’d make it back to the Big Leagues in 1980, appearing in seven games, the last of his brief career, going 2-for-13 with a stolen base and a couple of base-on-balls.
Over his brief three-year career, he ended up hitting .136 with three hits in 22 at-bats, appearing in 16 games on a Major League field.
If anyone has a full-resolution shot of him in the red Boston cap, please send it along so I can “update” this card!
Thanks!
Posted by John23 at 5:25:00 AM