Today I post up a “not so missing” 1977 card for former Boston Red Sox pitcher Rick Kreuger, who appeared in eight games during the 1976 season and collected the only wins of his brief four-year career: 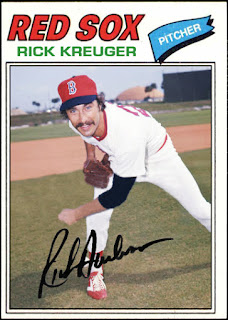 Kreuger originally came up in 1975, appearing in two games for Boston without factoring in a decision, pitching four innings and posting an ERA of 4.50.
The following year he went 2-1 over those aforementioned eight games, starting four and even throwing a complete game, with an ERA of 4.06 over 31 innings of work.
Though he’d spend 1977 in the Minors, he did get into one game for the Red Sox, but it wasn’t pretty, allowing two earned runs without getting an out, for that dreaded “inf” ERA, getting tagged for the loss to boot.
In 1978, he would find himself in Cleveland, pitching for the Indians, and would appear in the last six games of his Big League career, posting a respectable 3.86 ERA over 9.1 innings, all out of the bullpen.
Overall, over 17 Major League appearances between 1975 and 1978, he’d finish with a record of 2-2, with an ERA of 4.47 over 44.1 innings pitched.
Posted by John23 at 5:44:00 AM