On the blog today, we have a "not so missing" 1979 card for three-year Major league first baseman Dorian (Doe) Boyland of the Pittsburgh Pirates: 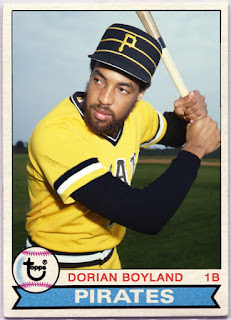 Boyland made his Big League debut in 1978 with six games for the Pirates, hitting .250 with two hits in eight at-bats, scoring and driving in a run .
He would be back in 1979, albeit for only four games, going 0-3 at the plate with two strikeouts before spending all of 1980 in the Minors.
In 1981 he would make it back to a Major League field, in what turned out to be the last eleven games of his brief career when he went 0-8 at the plate, collecting a walk while striking out three times.
All told, he finished up with a 21-game career that saw him go 2-for-21 at the plate, with a run scored and an RBI.