Next player up in my on-going 1975 “In-Action” sub-set is All-Star catcher of the Boston Red Sox Carlton Fisk, who was quickly asserting himself as arguably the best catcher of the American League by the time this card would have come out: 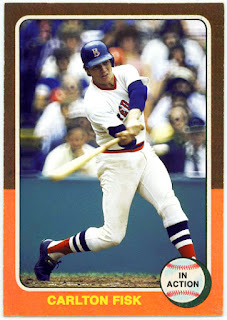 Fisk was already a Rookie of the Year with three straight All-Star nods and a Gold Glove by the time the 1975 season opened, and was about to help lead the Red Sox to their first World Series berth since 1967, giving us one of the game’s most memorable moments when he homered off the foul pole against the Cincinnati Reds in the 12th inning of Game 6, forcing a seventh and deciding game.
Incredibly, though playing the rough position of catcher, Fisk would go on to play 24 years in the Big Leagues, the final 13 with the Chicago White Sox, for whom he suited up between 1981 and 1993, playing across four decades!
By the time “Pudge” retired, he left behind 2356 hits, 376 homers, eleven All-Star selections and at the time, the career-record for home runs by a catcher with 351 and games caught with 2226, both since passed by Mike Piazza and Ivan Rodriguez respectively.
To cap it all off, in 2000, he was elected to the Baseball Hall of Fame, even though he was inexplicably dissed his 1st eligible year, receiving only 66.4% of the vote.
Posted by John23 at 6:36:00 AM