Another fun card to add to the "WTHBALLS" checklist, a "not so missing" 1976 card for 11-game Major League outfielder Art James, who got to play for his hometown Detroit Tigers during the Summer of 1975: 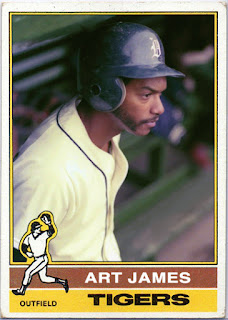 James made his Big League debut in April while playing what turned out to be his last game in August, collecting nine hits in 40 at-bats which comes to a .225 batting average, also scoring two runs while driving in one.

After that taste of the Majors he'd toil in the Minors for a few more seasons before taking his talents South of the border, playing in the Mexican League between 1980 and 1982, finally retiring from pro ball at the age of 29.