On the blog today we have another "not so missing" card for former San Diego Padres pitcher Dave Wehrmeister, who also got a 1978 edition here just about three years ago: 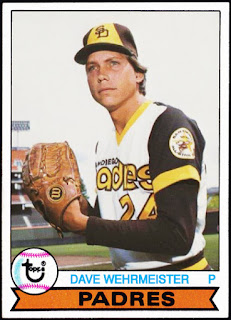 Wehrmeister appeared in four games for the Padres during the 1978 season, going 1-0 with a 6.14 earned run average in 7.1 innings of work.

The previous season he set playing time career-highs across the board when he played in 30 games, six of them starts, throwing 69.2 innings while going 1-3 with a 6.07 ERA.
He made his MLB debut in 1976, appearing in seven games while going 0-4 with a bloated 7.45 ERA in 19.1 innings pitched, with four of those games as a starter.
Sadly for him, as I mentioned earlier he’d only appear in four games during the 1978 season before spending 1979 and 1980 toiling in the Minors for both the Padres and New York Yankees organizations.
He’d make it back to a Big League mound in 1981, with the American League champ Yankees, appearing in five games , not factoring in a decision while throwing seven innings of work.
But again, he’d have to wait a few years before getting back to the Big Leagues, which he would do in 1984 with the Philadelphia Phillies where he got to appear in seven games for the reigning National League champs, pitching 15 innings without a decision.
In 1985, now finding himself in the South Side of Chicago with the White Sox, Wehrmeister would go 2-2 with a nice 3.43 ERA over 23 games, collecting the only two saves of his career while tossing 39.1 innings.
Yet again, the bump in action didn’t help him come the following season, as it turned out to be the last Big League action he’d see, pitching in Chicago’s Minor League system during the 1986 season, his last in pro ball.
All told, he finished his career with a record of 4-9 along with a 5.65 ERA over 76 appearances and 157.2 innings pitched.
Posted by John23 at 6:50:00 AM