Adding to my long-running 1971 "Minor League Days" sub-set, today the blog offers up a card for Rusty Staub, who was a 20-year-old who already had some full-time Big League action when this photo was taken in 1964: 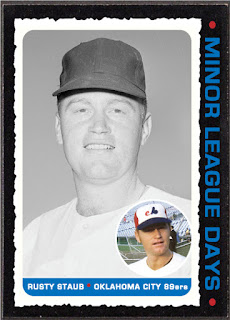 Staub actually already played a season and a half of Major League ball before being sent down to the Minors in 1964, spending time with the Oklahoma City 89ers, where he hit .314 over 71 games before making it back to the "Big Time" for good in 1965.
He started out as a 19 year old kid in Houston in 1963 and went on to play for Montreal, Detroit, Texas  and the New York Mets for two stints, with whom he retired with after the 1985 season.
And for those last five seasons with the Mets, he became one of the top pinch-hitters in the game and endeared himself to the Met faithful, even opening up a couple of well-liked restaurants in NYC along the way.
A few little "extras" about his career: Staub is one of three players (along with Ty Cobb and Gary Sheffield) to hit home runs as a teenager and as a 40-year old, and he is also the only player to amass 500 hits with four different teams (Astros, Mets, Expos and Tigers).
He was also the first player to play all 162 games in a season strictly as a Designated Hitter, which was for Detroit in 1978.
Lost in the crowd that was Rose, Bench, Jackson, Carew, etc. was this player who built a 23 year career, finishing up with over 2700 hits, 292 homers, 1466 R.B.I.'s, and six all-star appearances.

To me, he is a Hall of Famer who deserves a spot in Cooperstown.