Today's blog post is a fun one to add to the "collection", a "not so missing" 1970 card for eight-game MLB pitcher Luis Peraza of the Philadelphia Phillies: 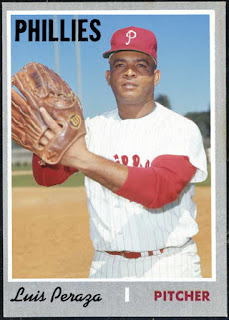 Peraza's entire Big League career spanned April 9th to July 4th of 1969, not factoring in a decision while throwing nine innings, pitching to a 6.00 earned run average.
He'd miss all of 1970 before making it back to pro ball in 1971, still in the Phillies Minor League organization, but he'd never take the mound in a Major League game again, pitching in the Mexican League in 1973 at the age of 31 before calling it a career.
Posted by John23 at 5:40:00 AM