Up on the blog today we have a card that really would have had to be in a "Traded" or "Update" set at season's end, a "dedicated rookie" for former New York Met Rookie of the Year pitcher Jon Matlack: 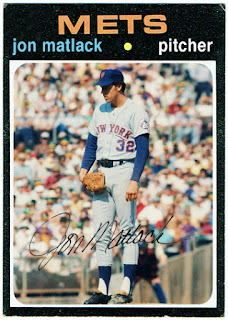 The reason I say all of that regarding a post-season set is obviously because Matlack didn't appear in a Big League game until the 1971 season, so for Topps to have an in-action shot of him for a card was 0out of the question.
However I wanted to create an action card resembling some of those other great action cards of the 1971 set (Lindy McDaniel, Chris Short, Nolan Ryan), so here you go.
Though only appearing in seven games for the Mets in 1971, it was 1972 before he got a full-time shot, and he made the most of it!
Matlack joined an already solid New York Mets staff and proceeded to post a 15-10 record in his rookie year, with a very nice 2.32 earned run average over 32 starts, including four shutouts.
Those numbers got him a Rookie of the Year Award, easily finishing ahead of second-place Dave Rader and fellow teammate John Milner, who finished third.
It would pretty much be the prototypical Matlack season as he’d go on to lead the league in shutouts twice, and average about 15 wins over the next seven years.
He’d split his time as a big league pitcher evenly between the Mets and Texas Rangers, and retire with an excellent 3.18 E.R.A., along with a final record of 125-126 and 30 shutouts in 361 appearances, 318 of them starts.
Posted by John23 at 5:28:00 AM