Been meaning to create a "Nicknames of the 1970s" card for Lee Mazzilli, who was really a hot item around my parts in Bensonhurst, Brooklyn in the late 1970's, known as the "Italian Stallion": 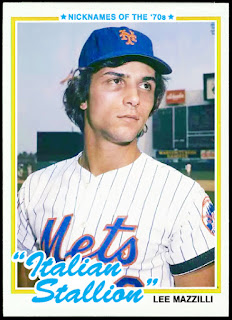 Mazzilli had himself quite a following back in his old neighborhood during his first tour with the New York Mets between 1976 and 1981.

Once Tom Seaver and Dave Kingman were shipped out Mazzilli was their star and future, giving the Mets some solid seasons between 1977 and 1980.
The Lincoln High School grad made his only All-Star team in 1979, arguably his finest as a Big Leaguer when he hit .303 with 181 hits and 79 runs batted in, all career-highs, along with 34 stolen bases and 78 runs scored.
He would go on to put in 18 seasons as a player before moving on to coaching, and eventually managing, which he did with the Baltimore Orioles in 2004 and 2005.
I remember when Joe Torre was out as Yankee manager after the 2007 season and my favorites for the job were Mazzilli or Larry Bowa.

Anyway, by the time Mazzilli retired as a player he finished with a .259 batting average, with 1068 hits over 4124 at-bats in 1475 games, stealing 197 bases, along with numerous young girls' hearts in my neighborhood!