Really fun card to create for the blog today, this one a "not so missing" 1974 card for one-game Major League pitcher Greg Heydeman of the Los Angeles Dodgers, who gets the landscape treatment for his custom: 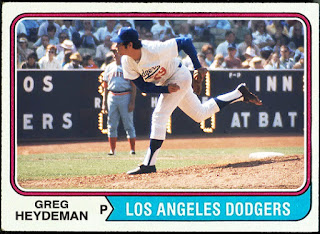 Heydeman was a 21-year-old when he made his Big League debut on September 2nd of 1973, pitching two innings and giving up one run on two hits while striking out and walking one batter each.

However he would be back in the Minors in 1974, having a disastrous season that saw him appear in 18 games, 12 of them starts, and pitching to an eye-opening 10.05 earned run average.
His 1975 season wasn't any better, going 1-11 in the Minors with a 6.87 ERA over 22 games, and he would play just one more year before retiring for good after the 1976 season.

I am always excited to create cards for players who have appeared in one single Major League game, so if there are any others out there I may have missed, let me know!