On the blog today, a player who has been a subject of mine here on the blog a couple of times before, former outfielder Oscar Brown, brother of "Downtown" Ollie Brown, who today gets a "not so missing" 1970 card added to his resume: 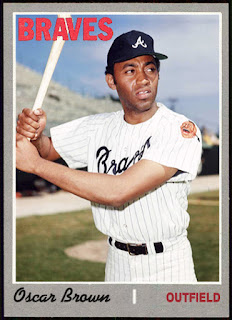 Oscar made his Big League debut during the 1969 season, appearing in seven games for the West Champion Atlanta Braves and going 1-for-4 at the plate with two runs scored.
Brown would go on to finish up a brief five-year career in 1973, appearing in 22 games, with 62 plate appearances and 58 official at-bats.
He batted .207 with 12 hits, three of them doubles, and three runs scored that season, and finished his career with a .244 batting average, with 77 hits, 14 doubles, two triples, four homers and 28 runs batted in over 160 games, all with Atlanta.

Never a full-time player, the most action he ever saw in any one season was in 1972 when he appeared in 76 games, with 168 plate appearances, almost three-times as many as he would have in any of his other four years as a Big Leaguer.