On the blog today, always happy to add another Negro League great to my long-running "Negro League Legends" 1972 sub-set, celebrating the greats of the NBL who were never given the chance to play Major League Ball: 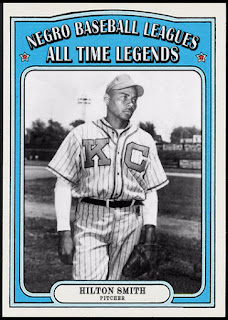 Often overshadowed by his teammate Satchel Paige (who wouldn't be?!), Smith Played for the Monarchs from 1936 through 1948, officially posting a record of 71-31 with a 1.68 earned run average, while making six all-star teams and winning the Negro League championship in 1942.
According to Negro League Museum Director Bob Kendrick, the old saying was, "...if you were going to hit anything, you better hit it off Satchel because you weren't going to touch Hilton Smith."
The reason for this was because there were many games where the great Satchel Paige would start and pitch about three innings to appease the crowd before Smith would come in to finish the last six innings,often with great results.
Fellow Hall of Famer Monte Irvin, who played in both the Negro Leagues and big leagues, said: “He (Smith) had one of the finest curveballs I ever had the displeasure to try and hit. His curveball fell of the table. Sometimes you knew where it would be coming from, but you still couldn’t hit it because it was that sharp. He was just as tough as Satchel was.”
But he was also a very good hitter, posting a career .323 batting average over his career.

Though he passed away in 1983, thankfully this baseball great was inducted into the Baseball Hall of Fame in 2001.