On the blog today, we have a career-capping "not so missing" 1970 card for former outfielder Dick Simpson, who played the last games of his seven year career in 1969, splitting the season between the New York Yankees and Seattle Pilots: 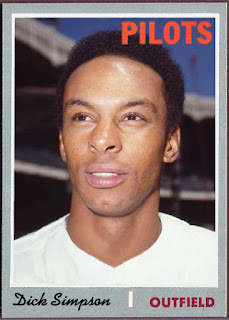 Simpson played in a combined 32 games, hitting .194 with 12 hits over 62 at-bats, hitting a couple of homers while driving in nine runs.
Never a full-time player, Simpson originally came up in 1962, getting into six games as an 18-year-old with the Los Angeles Angels, going 2-for-8 at the plate.
After a 1963 season in the Minors, he was back for good in 1964, playing parts of the next six years with the Angels, Cincinnati Reds, St. Louis Cardinals, Houston Astros, Yankees and finally Pilots.

All told, he finished with a .207 batting average over 288 games, collecting 107 hits in 518 at-bats,scoring 94 runs while driving in 56, playing all three outfield spots along the way.