On the blog today we have a "not so missing" 1977 card for former pitcher Geoff Zahn, who had a bumpy 1976 season that saw him appear in only three games for the Chicago Cubs: 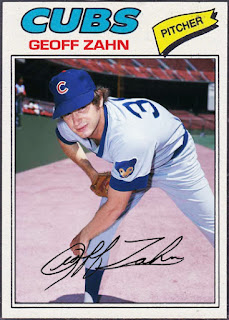 Zahn entered the fourth year of his Big League career that season, already 30 years of age, and had a season to forget, going 0-1 with a 10.80 earned run average over 8.1 innings of work for the Cubbies.
However 1977 would see his career turn for the better, as he would find himself as a Minnesota Twin and go 12-14 over 34 appearances, all but two starts, pitching just under 200 innings.
He would remain a solid starter over the next eights years, pitching through the 1980 season with the Twins before playing the last five years of his career with the California Angels, where he'd have his best year in 1982 when he posted a record of 18-8 with a 3.73 ERA over 34 starts, with four shutouts.