Up on the blog today we have a career-capping "not so missing" 1971 card for former pitcher Bill Faul, who made it back to a Big League mound during the 1970 season after spending the previous three seasons in the Minors: 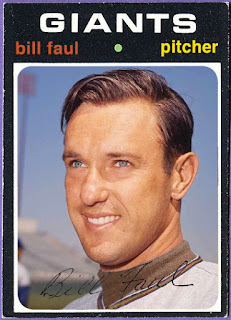 Faul, who last pitched for the Chicago Cubs in 1966 when he appeared in 17 games, made it all the way back to the Majors, now with the San Francisco Giants, appearing in seven games, not factoring in a decision while pitching to a 7.45 earned run average.
Turned out it would be the last action of his career as he would be back in the Minors in 1971 and 1973, before retiring for good.
Originally up with the Detroit Tigers in 1962, he would spend three years with them before moving on to the Cubs, where he would play in 1965 and 1966.
Never a full-timer, the most action he would see in any one season was in 1963 with Detroit when he appeared in 28 games, with 10 starts, throwing 97 innings while going 5-6 with an ERA of 4.64.