On the blog today, I am giving myself a do-over of an earlier "missing" 1975 card I created for the blog, one for former Philadelphia Phillies pitcher Jesus Hernaiz: 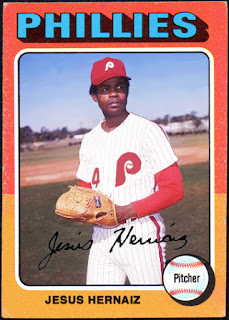 Originally posted up here around five years ago, the original image I used was a bit sub-par, so when I found this Topps image, I figured it would be a good time to "fix" it.
In his one season in the big leagues, Hernaiz posted a 2-3 record with a 5.88 earned run average over 27 games and 41.1 innings pitched during the 1974 season, never to appear in another game at the top level again.

He did put in about 15 years in professional ball, from the Minors to the Mexican League, pitching through the 1983 season, but that brief glory in the Summer of 1974 would be it as far as any MLB time.