A 1973 "IN MEMORIAM" SPECIAL FOR JACKIE ROBINSON

On the blog today is a card I have wanted to create for some time, a 1973 "In Memoriam" card for the great Jackie Robinson, after his death on October 24th of 1972: 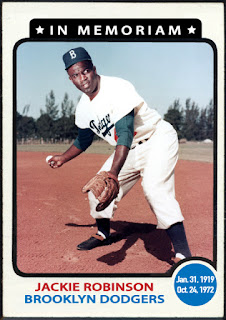 Granted times have changed a great deal since he passed away, but it would have been nice if Topps would have remembered the trailblazer in 1973, celebrating his life and what he meant to the game.
It still crushes me when I remember that the man was still only 53 years of age when he passed away, imagining if he would have lived another 20, 30 years and gracing us into the 21st Century.
What needs to be stated at this point regarding his Hall of Fame career?
He broke the color-line, which I cannot even begin to imagine the difficulty in that alone, yet still managed to put in 10 great years as a Major League all-star second baseman, winning Rookie of the Year in 1947, league MVP in 1949, six all-star nods, and a batting title in 1949 when he hit .342.
At this point talking about statistics seems trivial in relation to the sheer impact he had to the sport and American culture.
It's a shame Topps missed this opportunity back in 1973, honoring a man who made it possible for "current" stars like Hank Aaron, Willie Mays, et al to come along years later.
Posted by John23 at 6:28:00 AM