Up on the blog today we fill a hole somewhat for a manager that, if you were solely following Topps cards in the 1970's instead of the game itself, you wouldn't even know who managed the Chicago White Sox in 1976, Paul Richards: 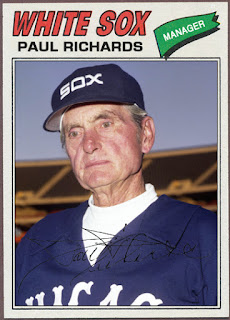 I could not pass up the opportunity to create a card for the baseball lifer, who came back to manage Big League ball after 15 years, last managing the Baltimore Orioles from 1955 through 1961.

Richards led the White Sox to a record of 64-97 in 1976, sadly a last place finish.
His first managerial position in the Majors was with the White Sox themselves, leading the team from 1951 through 1954, with a fourth place finish and three third place finishes.
In the 1976 set Topps had Chuck Tanner shown as the team manager on the team card, and then had enough time to have Richards' replacement on their 1977 team card, Bob Lemon.
So there you go!

A wrong has finally been made right!