Some seven years ago here on the blog I created a nickname card for the great Tom Seaver, a "Tom Terrific" edition for one of the best to ever toe the rubber.

Well today I wanted to post up a second such nickname card, since the man was so amazing he had two great nicknames, this one "The Franchise". So here you go: 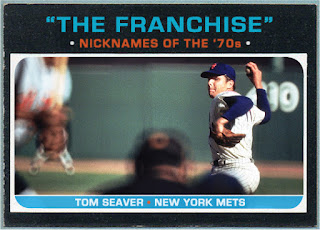 For the New York Mets, this man certainly was the franchise, as it was he who began the turn-around from cellar-dwellars to miracle World Champions in 1969, just seven years after joining the league.
Seaver was a star baseball player before he was even a pro, commanding HUGE attention during his college days, eventually leading to some controversy when he originally signed with the Braves in 1966, only to have the signing voided, allowing the New York Mets to make arguably the best pick in franchise history in the 1966 amateur draft.
The man would end up 311-205 record with 61 shutouts and 3640 strikeouts along with a brilliant 2.86 ERA over 20-seasons and 656 appearances, 647 of which were starts, taking home three Cy Young Awards (and getting ripped off a fourth in 1981).
He was in prime form in the mid-70’s, putting together nine straight 200 strikeouts seasons while getting tabbed to ten all-star teams in his first eleven seasons.
God I loved Tom Seaver when I was a kid. More than any other pitcher of that era I was in awe of this man. He just seemed like a "super-hero" to me.

"The Franchise", "Tom Terrific", either way, one of the all-time greatest pitchers the game has ever seen.