Fun new thread I'm starting today, as I have always been a fan of the 1977 Topps Football set with their "1000 Yard Rusher" designation, so Id decided to create a similar set for the 1978 baseball set, celebrating the 1977 baseball season and it's home run boom of sorts, beginning with the MLB leader, George Foster: 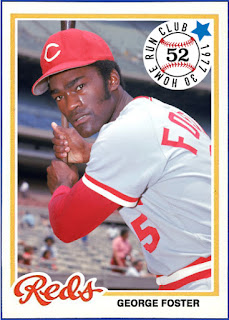 As a kid I remember Baseball Digest running a small article about the 1977 season and how it had a home run explosion, from George Foster becoming the first Big League batter to reach 50+ homers since Willie Mays in 1965, to the Chicago White Sox "South Side Hitmen" team with Richie Zisk, Oscar Gamble et all almost reaching 200 homers (when that was actually something special).
And let's not forget the Boston Red Sox, who slammed a very impressive 213 home runs that year, let by American League leader Jim Rice who hit 39, followed by first baseman George Scott's 33 and third baseman Butch Hobson's 30.
It always stuck with me so I though creating a sub-set of the 19 players who hit 30 or more homers that year would be fun!
George Foster demolished the league’s pitching in 1977 by leading in runs (124), home runs (52), runs batted in (149), slugging (.631) and total bases (388) while also collecting 197 hits and posting a .320 batting average.
The man was an absolute beast! So much so that it actually makes people forget he was runner up to the league’s MVP Award the previous season, losing out to teammate Joe Morgan.
Nevertheless, Foster's amazing 1977 sadly overshadowed a man who had the year of his career that very same season, Jeff Burroughs, who hit a career-best 41 for the Atlanta Braves, but is somewhat forgotten in light of perhaps the season of the decade as far as power hitters go in the 1970s.

So watch for my Jeff Burroughs "30 Home Run Club" card in the next week or so as we go back and celebrate the power-year that was 1977!