Up on the blog today is my third card creation for former catcher Art Kusnyer here on the blog, this one a 1977 “not so missing” edition: 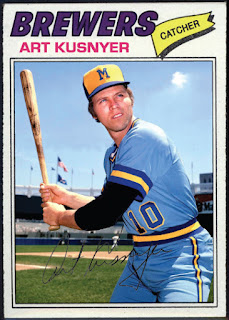 Kusnyer appeared in 15 games for the Milwaukee Brewers in 1976 after spending all of 1974 and 1975 in the Minor Leagues.
Over that limited playing time he hit .118 with four hits over 34 at-bats, with two runs scored and three runs batted in.
Kusnyer was yet another of those players I read about in a SABR article that spoke of guys who posted the most career at-bats or innings pitched who were not represented on a Topps card (in this case, a card of their own).
Kusnyer came up for a cup-of-coffee in 1970 with the White Sox after getting picked in the 37th round of the 1966 amateur draft.
After four games and ten at-bats with Chicago in 1970, he was traded to California in March of 1971 for a couple of minor players, appearing in only six games for the season.
However 1972 would fare much better for the young catcher, as he would go on to play in a career high 64 games, good for 198 plate appearances.
For the year he batted .207, getting 37 hits in 179 at-bats with two doubles, a triple and two homers.
However this wasn't enough to get him more playing time the following season, as the Angels already had Jeff Torborg and John Stephenson ahead of him in the depth chart for the position, so all Kusnyer would see as far as playing time in 1973 would be 41 games, good for 67 plate appearances and an anemic .125 batting average.
However, not all was a lost-cause for the youngster, as on July 15th of that year Kusnyer would have perhaps the biggest thrill of his Big League career, catching Nolan Ryan's second career no-hitter against the Detroit Tigers at Tiger Stadium.
But when 1974 rolled around, Kusnyer found himself struggling to find a spot for himself in the Milwaukee Brewers organization after being traded by California in October of 1973 in a nine-player swap between the two clubs.
He'd end up toiling in the Minors for the next two seasons before finding his way back into a Major League game in 1976, getting into those 15 games for the Brewers.
His last hurrah on the Major League level would be in 1978 with the Kansas City Royals, playing in nine games and getting three hits in 13 at-bats, good for a .231 average.
He'd scratch out another season of Minor League ball for the White Sox in 1979 before calling it a career and eventually moving into coaching work for the Sox and the Oakland A's over the next 28 years.