Up on the blog today we have the great Gaylord Perry added to my long-running “Minor League Days” 1971 sub-set, celebrating the man’s fantastic professional career that spanned over four decades: 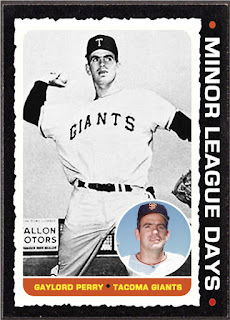 This image showing him as a Tacoma Giant was taken in the first couple of years of the 1960’s, before he went on to become a solid starter for San Francisco between 1962 and 1971.
Gaylord Perry for me growing up in the late-70’s/early-80s pre-teen was the stuff of legend since he was the first player I remember reaching 3000 strikeouts, which at the time made him only the THIRD player to do so behind Walter Johnson and Bob Gibson.
He was also (and I remember this vividly) the first pitcher to reach 300 wins since Early Wynn, which was a 20 year gap, the first pitcher to win a Cy Young Award in both leagues, which he did with the Indians in 1972 and the Padres in 1978.
That 1978 season saw him take home the award after a fantastic year that saw him go 21-6 with a 2.73 earned run average at the age of 39 after coming over from the Texas Rangers.
People may also forget that for a relatively brief moment he was the all-time strikeout king before a couple of guys by the name of Nolan Ryan and Steve Carlton caught up soon after.
He posted 5 20-win seasons, finished with 314 for his career, along with 53 shutouts and 3534 strikeouts over a 22-year Big League career, tossing 300+ innings six times.
Is it safe to say that he’s almost a forgotten all-time great?