Let’s go and give versatile pitcher Tom Hall, aka “The Blade”, a 1973 nickname card, adding to my long-running “Nicknames of the 1970s” thread started here many years ago: 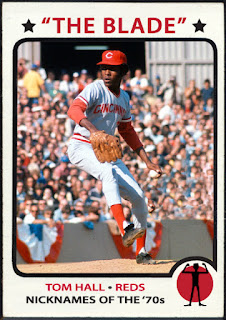 Email ThisBlogThis!Share to TwitterShare to FacebookShare to Pinterest
Labels: 1973, Nicknames of the 70's, Reds, Tom Hall