OK, so today on the blog we have a long overdue “do-over”, a redone and CORRECTED 1973 card for former All-Star Oakland A’s outfielder Joe Rudi, who was given the disservice of having fellow All-Star teammate Gene Tenace pictured on his card.
So here’s a redone card with a nice shot from the 1972 World Series featured: 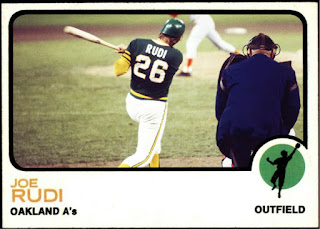 Rudi had two second-place MVP finished during his great run during the middle part of the decade, in 1972 and 1974, while also taking home three straight Gold Gloves between 1974 and 1976.
He led the league with 181 hits and nine triples in 1972 along with doubles (39) and total bases (287) in 1974 while also giving the A’s a flexible fielder that could play all three outfield positions as well as first base.
Such a solid player teamed up with others like Sal Bando and Gene Tenace that made the A’s much more than just superstars like Reggie Jackson and Jim “Catfish” Hunter.
By the time Rudi retired, he finished up with a career .264 average, with 179 homers and 810 RBIs over 1547 games and 5556 at-bats playing for the A’s, California Angels and Boston Red Sox between 1967 and 1982.
By the way, for those not familiar, here’s the original as-released card mentioned earlier: 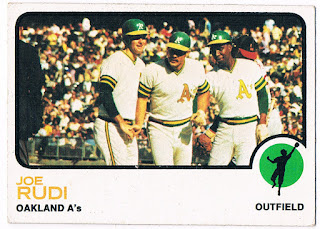