Up on the blog today to start the new work week, a 1972 career-capping “not so missing” card for former catcher Jim French, who played the last of his Big League games in 1971 with the Washington Senators: 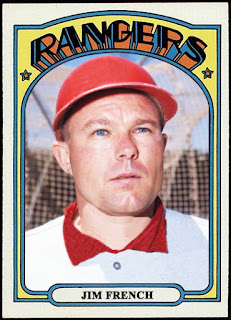 Now, yes he was never an official member of the Texas Rangers, and was released by Washington at the end of the 1971 season, but hey, I figured with this unique situation where a player finished his career while his team became another franchise during the immediate off-season, why not make up a card like this?
French played the entirety of his seven-year Major League career with the Senators, beginning in 1965 through the 1971 season when he only appeared in 14 games, hitting .146 with six hits in 41 at-bats over that limited rolse.
Never a full-time player, the most action he ever saw in one season was 69 games in 1970, with 63 games the season prior.
It seems he retired from professional ball as he has no Minor League play after 1971, thus finishing his career with a .196 batting average with 119 hits in 607 at-bats, spread out over 234 games, with five home runs, 53 runs scored and 51 runs batted in.