It’s been a long while since I added a card to my long-running “Highlights of the 1970’s” thread, one of my oldest here on the blog, but today we honor one of the greats of the game, Frank Robinson, and his landmark managerial position in 1975, making him the first African-American to hold the position in Major League ball: 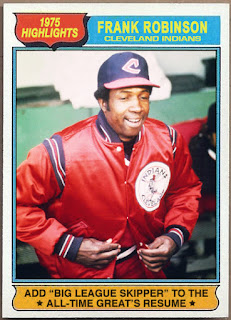 Robinson was actually a player-manager his first two years at the helm in 1975 and 1976, going a combined 160-158, good for consecutive fourth-place finished in the American League East.
He would go on to manage for parts of 16 years between 1975 and 2006, when he managed the Washington Nationals at the age of 70.
Robinson is perhaps the “greatest underrated player” in Major League history.
A two-time Most Valuable Player, and the first to do it in both leagues, Robinson also took home a Triple Crown in 1966, was a twelve time All-Star, finished in the Top-4 in MVP voting outside his two wins, and oh yeah, as mentioned earlier was also the first African-American Manager in league history.
When he retired as an active player in 1976, Robinson was in the top-5 in so many offensive categories he was in the company of Babe Ruth, Hank Aaron and Willie Mays.
Yet oddly enough, perhaps because of the era he played in, he would get buried in the “all-time greats” conversation in lieu of the aforementioned players along with guys like Ty Cobb, Roberto Clemente and Ted Williams.
I would say he and Stan Musial are the TWO greatest “underrated” players of all-time, and you could arguably throw in others like Bob Feller for good measure.
Just an all-out legend in so many ways.

Email ThisBlogThis!Share to TwitterShare to FacebookShare to Pinterest
Labels: 1976, Frank Robinson, Highlights of the 70's, Indians