Up on the blog today, we have a “not so missing” 1979 card for two-year Major League infielder Mike Eden, who played the last of his Big League games in 1978 with the Chicago White Sox: 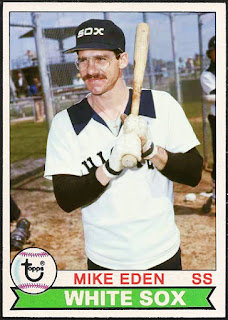 Originally up for five games with the Atlanta in 1976 in which he went 0-8 at the plate with a run batted in, Eden played in 10 games for Chicago in his return a couple of years later, collecting what turned out to be the only two hits of his career over 17 official at-bats, along with four base on balls.
He would go on to play two more years in the Minors before retiring in 1980, playing for the Baltimore organization and hitting about .260.
When I looked at his pro career, I found out the guy was a solid .300-hitter while playing in the San Francisco system between 1972 and 1976, as well as in 1977 while in the Atlanta system.
While he finished his brief MLB tenure with a batting average of .080 based on his two hits over 25 at-bats, his nine year Minor League career average was a very nice .295.