Today’s blog post has a “not so missing” 1975 card for three-game Major League pitcher Randy Sterling, who made it to the “Big Show” as a 23-year-old as a September call-up in 1974: 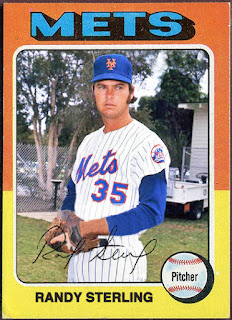 The Key West, Florida native went 1-1 over that time, with an earned run average of 4.82 in 9.1 innings pitched, with two of those appearances starts.
Sadly for him his 1975 season was spent entirely in the Minors, where he posted a record of 10-11 with a 3.57 ERA over 29 games, all but one starts, before retiring though still only 24 years old.
I can’t find any other information on why he retired from professional ball though still seemingly an effective pitcher, perhaps someone out there knows?
He spent all of his seven pro seasons in the New York Mets organization, winning 10+ four of those years, with career-highs of 12 wins in both 1972 and 1974.